It was a very special Easter for Baseball Ross and I…we had drinks at Ryan Howard’s Mansion in Belair Beach.

We had a lovely drive over the bridge and the weather was perfect we couldn’t have asked for more.

Notice I didn’t say IN Ryan Howard’s house, just at the house.

If you’ve been reading my blog for any length of time, you will know I’ve made several visits over the years to check on the progress and eventual completion of Ryan Howard’s mega-mansion that includes two pools, 2 elevators, a lazy river, a bowling alley and much, much more.

You can read my previous blogs (in order) HERE, HERE and HERE.

Today was a perfect day for a walk on a public beach. Yes, Howard’s house is on a public beach so you can walk by and take a look at his lazy river and pool. The house is located at 1700 Gulf Boulevard in Belleair Beach, Florida. Please note there is NO public parking on the streets of Belleair Beach and the closest PUBLIC parking lot is a half mile away. The beach access two lots down from Howard’s home is for Belleair Beach residents only by permit. Do not park there unless you want your car towed.

Half a mile north of his home is Morgan Park, located at 2650 Gulf Boulevard. This is Belleair Beach’s ONLY public parking beach access. It is right on the beach and is a PAID lot. The park is hard to find and this is the only marker.

There are bathrooms, outdoor showers and a small shelter. There are no drinking fountains. Be aware it is a very small lot.

Ross and I put together a video with many shots of the house and surrounding area. You can watch it HERE.

Hope you enjoy the video.

UPDATE: Ryan Howard has sold the home, you can read my blog about it HERE.

It’s been a few months since Baseball Ross and I made the pilgrimage to Belleair Shore to check on the progress of the monstrosity of a 17,000 soft home  that Ryan Howard is building on the beach.

The Tampa Bay Times noted that Howard spent $80K on doorknobs alone. After several years it appears that it is nearing  completion.  Gone is the construction trailers, white work men’s vans and portapotties that lined the front yard.

You can read my previous stories HERE and HERE.

The pictures I took on Mother’s Day are below: 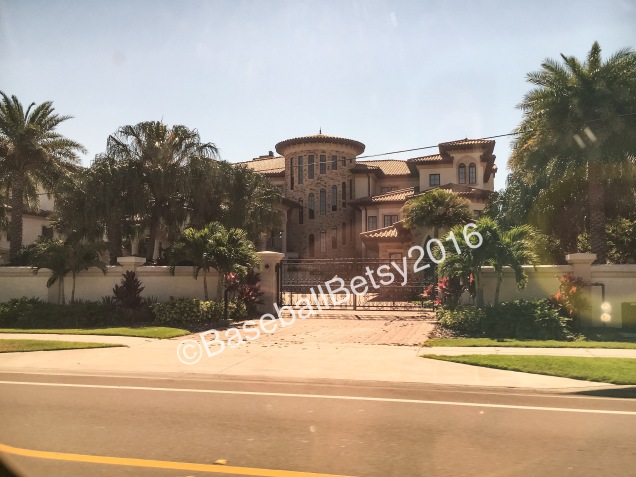 Hopefully, Ross and I will have the time to take a walk on the beach side and I will post pictures from that side when we do.

Ok, I may not be Mark Twain, but today’s story of the Phillies baseball game does involve a jumping frog.

Baseball Ross, our visiting friend, B and I managed to snag seats in the front row along the third base side. It was a beautiful sunny day, one of the best in a long while. It was at the beginning of the fourth inning when the Hooters Girl turned and said, “Look! It’s a little frog!”

Everyone turned to look and indeed, there was a little yellow frog poking his head out from between the padding and the concrete retaining wall. When it realized we all were staring at it, it ducked back under the padding. The Hooters girl then poked the padding and that’s when it happened!

The frog jumped and easily leapt a good two feet…right onto B’s hand! She screamed and threw her hands up! I screamed thinking she had done that because a ball was coming with us! The frog then leapt and ended up under the front row. Several people screamed that they didn’t like frogs, but the gentleman on B’s other side and I became very concerned that someone would step on the little guy.

So we tried go get to where we could corral him. Eventually, the gentleman managed to grab him and toss him back on the field…the Hooters girl was not happy with that! She took the opportunity to take a bathroom break and leave the field.

The poor little guy looked traumatized by the ordeal. 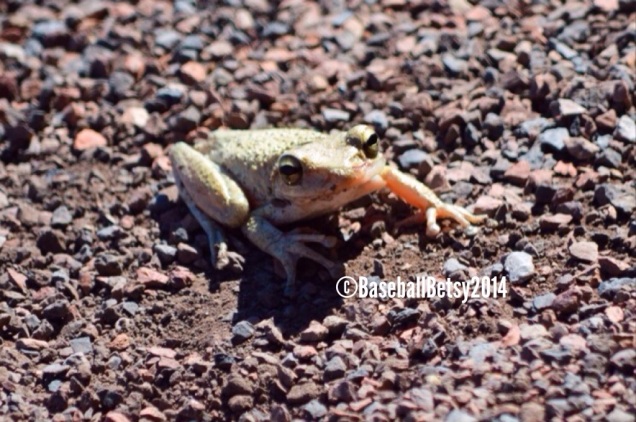 It was then that Mike the security guy came by and I gave him my cup and Mike got another guard to capture the frog dubbed, “Ryan Hopper” back to the wetlands outside the stadium.

We also learned today that sitting next to the Hooters Girl (when she’s not hiding from a frog) can get you on TV.

Can you see us?

Soon after the “Celebrated Jumping Frog” Ryan Hopper was returned to the swamp, we realized we were up 9-3, we decided that since it was B’s final night here in Clearwater we’d take her to the beach and every Phillies fan’s “Mecca” the “Taj Mahal” known as Ryan Howard’s house.

From the street, it’s vast, three times the size of the surrounding properties.

The house is situated on a PUBLIC beach, only a few blocks from a public beach access lot.

The house is a monstrosity and the rumors of a “lazy river” running THROUGH the house are true. 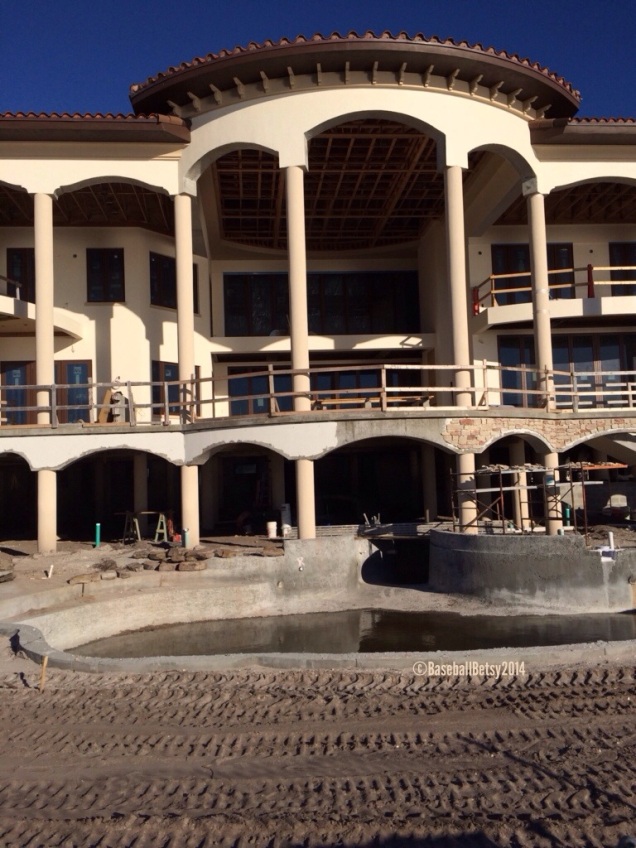 You can’t quite see it, but there are concrete bridges crossing the river.

It really was larger than any house I’ve ever seen and from Ross and I just finishing having our little house built last year, let me assure you that Howard’s place isn’t even close to being done.

May be by the time B returns on her next visit, Howard’s house will be completed…..or if it’s like everything else when it comes to construction, may be not.