Comcast Sports Net is reporting that the Rangers are scouting Cole Hamels, who is in the last year of his contract. Hamels wants a long term deal.

Texas would likely give up Mike Olt an up and coming 3rd baseman to take Polanco’s place. You can read the specifics here.

I has a sad. I hope this doesn’t happen. After trading Thome for a couple A-level players, I’m afraid the fire sale has begun. I have lost all faith in Amarro. He needs to go. I’m losing all hope. I’m going to go crawl in a closet and stay there till next February, peek out and see if its safe to see who’s left. *weeps*

Ken Rosenthal of Fox Sports is reporting that the orioles and Phillies have reached a deal to trade Jim Thome!

Announcement to be made after the game…

I’ve had a tough week or so with a nasty ear infection but am on the mend.

I spent part of the afternoon updating my full website, why not mosey over and give it a peek?

There isn’t much better than opening your Twitter and seeing this:

Right now, no one else deserved it more! I’m so glad I got his autograph last week!

Way to go and congratulations Cody!!!!!!!

You can read the disappointing details HERE

I’m so disappointed. The hits they just keep a comin’, don’t they?

I’m a little excited, today is the first GCL game of the year. The weather here in Clearwater seems to be on the tolerable side (the humidity is low for a change) and Ross and I have new chairs to sit in at the game (they even have “roofs” to shelter us from the sun!)

The last GCL game I saw was in 2010, the Championship winning team.

I will be tweeting from the game and may blog if something interesting arrises.

I can’t even find the words to describe how I feel right now. I’ve always been known for my loquaciousness and for me to be speechless is beyond the pale.

There are so many problems, where can I start?

1. Injuries. The Phils weren’t hit by the injury bug, it’s more like a plague of injury locusts. Howard, Utley, Thome, Martinez, Galvis, Halliday, Stutes, Nix when will it end? At one point, we had NINE guys on the DL.

2. Age. I’m starting to think they might go faster on one of those Hove-arounds you see advertised on TV… You can go, go, go in your Hove-around! Ok, I’m kidding, but age does contribute to reason #1.

4. Contract Uncertainty. Hamels and Victorino’s contracts are up. With the problems we’ve been having with Blanton, Kendrick and the floating fragment in Worley’s elbow can we afford to let Hamels go? No. The problem is that to keep Hamels and stay under the luxury “tax” payroll limit, there has to be some concessions made…and it looks like Hamels importance will outweigh Victorino’s so unless Vic is willing to lessen his demands; we will have to let him go.

That being said, if Vic goes, there are plenty Pharm Hands willing and capable of stepping in: Derrick Mitchell, Domonic Brown, Steve Susdorf, Tyson Gillies, Jiwan James, they’re all just waiting. I know they are lacking in experience, but I’ve said it before and I’ll say it again; I’d rather lose some games as part of a learning curve rather than because Amarro went to a fire sale and picked up the first over 40 player he could find.

5. Attitude Adjustment Needed. Antonio Bastardo had to miss games because he threw a temper tantrum and punched an exercise machine which ironically punched him back. Now he’s got stitches, swelling and as Uncle Chuckles mentioned today, an infection to boot. Wonderful.

Shane Victorino also seems flat. I swear it seems like he’s given up. This goes right back to #4.

This bad attitude just seems to be spreading like a cancer.

I’m at such a loss. Sadly, there’s nothing we as fans can do. It’s so hard to sit here and watch our beloved Phightins suffer. Will it get better?

We’ve lost so much, players, games, spirit, I’m not sure that getting Howard, Utley or anyone else back will do enough to change our failing season.

I just don’t know and frankly I’m not sure that Manuel or Amarro do either.

For the last two weeks, Jim Thome, Michael Martinez and then Chase Utley have been playing rehab games with the High-A Clearwater Threshers. The Philly papers and bloggers were HORRIFIED that these glorious Major Leaguers could be booed and heckled by their own farm team’s fans.

A year ago, even six months ago, I would have shared this sentiment.

Things changed when we moved to Clearwater/Dunedin permanently. I’ve gotten to know quite a few of the Threshers’ season ticket holders. After listening to them, to their point of view, I have to say I’m starting to understand them…Don’t get mad, don’t click away…Keep reading and you might get where we are coming from.

The minors are where young guys or “The Kids” as the season ticket holders lovingly call them, work, grow and do everything they can to make the Bigs. For them, every single game could make a difference in not only their progression as a player but could make a difference in their entire career. Every game is important. This could be the night where all the instruction the coach has been giving them clicks and it can all change.

This is what the season ticket holders love. Watching these guys playing every game like it might be their last or it might be the next step to their dreams. These “Kids” play because if they don’t, they’ll never have the change to make all their dreams come true. It’s a hunger like no other.

Then one of these Major Leaguers come down to rehab and for every game they play, one of the “Kids” has to take a seat. They have to sit and nothing happens for them. Not only that, the rehabbers hold a roster spot that as they move up in their rehab, keeps a deserving “Kid” from taking the next step.

It’s different when they play in the Extended Spring Training games or the training for the Short Season team or Gulf Coast teams. In those games, they bat first every inning and they do not count. They take batting practice during these games but no one has to sit or miss out on an opportunity to show what they can do.

So when the MLB players take a roster spot from a “Kid”, a 41 year old taking a job from a 21 year oldit’s a little easier why some of the people who are fully invested in these “Kids” get a little testy.

I’m not saying that I, myself, heckled Thome or Utley. I didn’t. I reserve my “razor wit” for the umpires. 😉 What I am saying, is that I can understand the frustration of those who live and die every with every play of every game of their “Kids”.

With the plethora of injuries that are plaguing the Phillies this season, Clearwater is looking to be a “Nursing Home” rather than a development league this summer. For those who love our “Kids” its just a little rough to watch. That’s all. It’s not hatred of the players, just an expression of frustration. 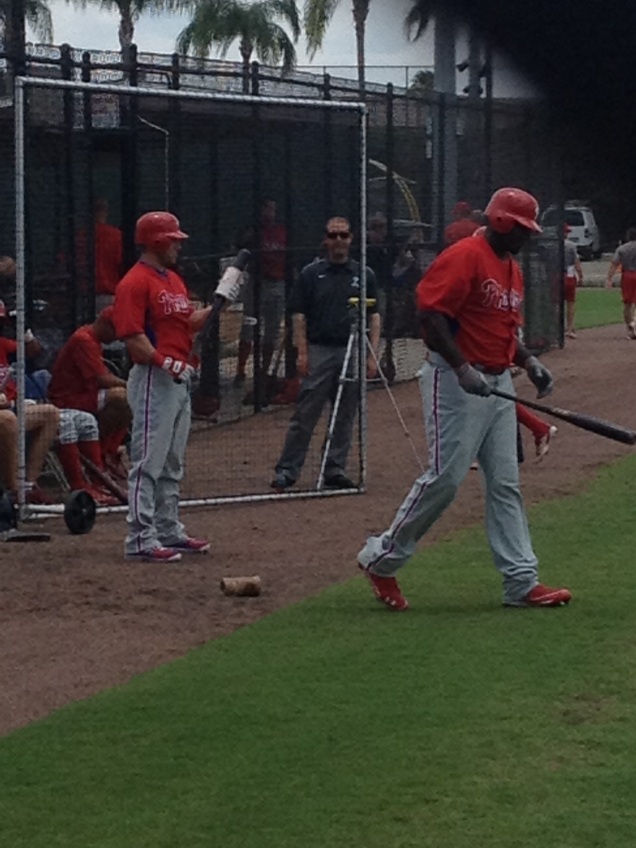 Both seem to be moving well however neither has done mug in the at bat I saw.

Keep checking back for more…

I’d like to apologize for my absence, between Clearwater being on the road last week and being ill for several days I’ve been out of the loop.

I got lucky tonight and got a ball signed by Jim Thome!

Thome was asked as to how many more games he would be playing in Clearwater and he replied, “This is the last one.”