How’s the the theme from Cheers go?

Sometimes you wanna go where everybody knows your name,
And they’re always glad you came…

This is what I love about minor league sports. Baseball Ross and I have been seriously following the Phillies farm system for almost 10 years. We have gone to spring training for about 7 of those years. Before we move to Florida, we would spend the summer driving to Lakewood, Williamsport, Reading and even managing a few days to watch the Threshers.

We do not really go out of our way to get to know all of the players, we let them do their job, but we have had the privilege of getting to know a few of the guys over the years.

Through writing our blogs, we’ve found that friends and family of the players follow us since reporting at the lower levels can be sparse, as well as getting to know others who love minor league baseball as much as we do.

It makes all of this quite amazing. We’ve met all kinds of people. Some famous, some not so famous. BUT we all share our love of the game and there is a fellowship in that. There are a some games where I visit other fans or players family members that I’ve met. Sometimes if a game is close I’ll try to tweet or blog about what’s going on, but baseball to me, has become so much more than just a game, it’s a community.

It almost makes me think of the opening narration by Annie Savoy at the beginning of Bull Durham:

I believe in the Church of Baseball. I’ve tried all the major religions, and most of the minor ones. I’ve worshipped Buddha, Allah, Brahma, Vishnu, Siva, trees, mushrooms, and Isadora Duncan. I know things. For instance, there are 108 beads in a Catholic rosary and there are 108 stitches in a baseball. When I heard that, I gave Jesus a chance.

So for me there’s much more to baseball than “just a game” it’s a place to meet people, see some great places and may be find a place where everybody knows your name.

Carlos Ruiz is coming back from his suspension for banned substances. He was allowed to play five games in the minors prior to his return to the Phillies. Wednesday was his second game with the Threshers on his way back to the big club.

If you have been following my blog for any length of time, you will know that I am a big time collector of autographed baseballs. It’s my favorite thing to collect and I have two mostly-filled bookcases to show for my effort. Anyone who’s “in the know” about collecting the Phillies’ autographs will know that Ruiz is one of the hardest to get. Until this spring, I honestly don’t know if I have EVER seen him sign in a public setting.

This spring was different. He actually signed a few times. Not much, but considering I’ve never seen him sign anything it was a vast improvement. Wednesday, Baseball Ross and I spent the day in Tampa (shopping, he, he, he) so that we would be sure of getting to the ball park early and not getting caught in the traffic crossing the Courtney Campbell Causeway.

We picked up our FREE tickets at the window (having Threshers’ season tickets has its perks) and headed down to the field. I elected to go down along the third base side, all alone. The other autograph hounds when next to the dugout on the side towards the plate. When Ruiz came into the dugout all the other hounds started hooting “Choooooch”. I, all alone on the other end, said nothing. When he exited the dugout I simply asked, “Carlos, would you please sign my ball??

He smiled slightly and asked, “Where’s your ball?”

I had JUST gotten to the rail when he came out so I was unprepared, which breaks one of my cardinal rules of autograph seeking–ALWAYS BE READY.

I dug quickly and produced the ball and he signed it. I thanked him for signing and welcomed him back to baseball.

Friends soon arrived and waited for him to return to the dugout after warmups, again after being POLITELY asked, Ruiz provided my friends with autographs of their items. The fans on the other end who yelled, “Chooch”…well they went home empty handed. Moral of the story: always be polite.

Ruiz was third in the line up and when he came to the plate there was two on base. It took a few swings, but he smacked one of the longest balls I’ve seen hit out of Steinbrenner field.

He hit a three run homer!

He was greeted at the dugout by his Threshers teammates with high-fives.

Now, while I do NOT condone what Ruiz did off the field to result in his suspension, I would NEVER in my life ever condone what happened during the rest of the game. I’m also afraid he will have more of this in his future.

From that point on, every time Ruiz came to the plate this obnoxious Yankee fan heckled Chooch. It was exceptionally loud with the small crowd in attendance. This fan’s voice bounced and was amplified by the stadium. This jerk yelled things like:

“Go back on steroids”
“You juicer”
“Cheater”

and a few other things I won’t dare to repeat in pleasant company.

Really? And Yankee fans wonder why no one likes them.

Like my mother always said, “If you don’t have anything nice to say, don’t say anything at all.”

Last night at Brighthouse, it was Ed Randall’s Bat for the Cure prostate cancer awareness night. In support, the Threshers wore light blue jerseys that were auctioned off with the proceeds going to Randall’s charity,

Ross and I bid on three jerseys, Perci Garner, Carlos Alonso and Colin Kleven. When all the dust settled, we won Alonso and Kleven.

After the game, we went down to the field to get the jerseys ad have them autographed. 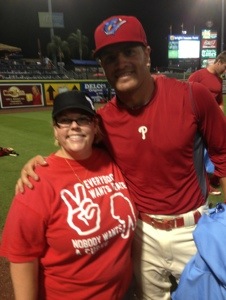 The ironic thing is that this wasn’t the first time we had tried to win Kleven’s jersey. Three years ago, we had driven up to Williamsport to see Jesse Biddle pitch in his first professional game. That was “Celebrate Recycling” night. The jerseys were auctioned off that night as well. Ross and I had bid on Biddle’s and Klevin’s jerseys that night and lost. I remember the bidding on Biddle’s jersey was up over $250 by the end.

So last night, Ross finally got his Kleven Jersey…he just had to wait three years. 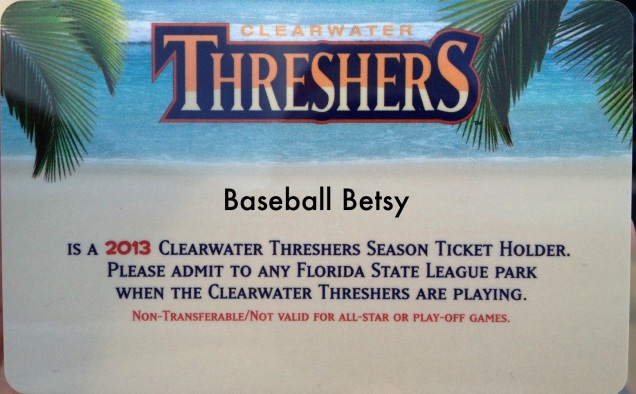 It’s the home opener here in Clearwater. They’ve got a good size crowd.

Perci Garner is on the bump tonight and he’s mowing the Jays down. He looks in midseason form. Perci has a good change-up, curve ball and is painting the corners with his fastball.

Top of the 7th, Garner is done. Gave up a single to start, then retired the next 17 batters in order.

Colby Shreve is now in for the Threshers.

And so it begins… 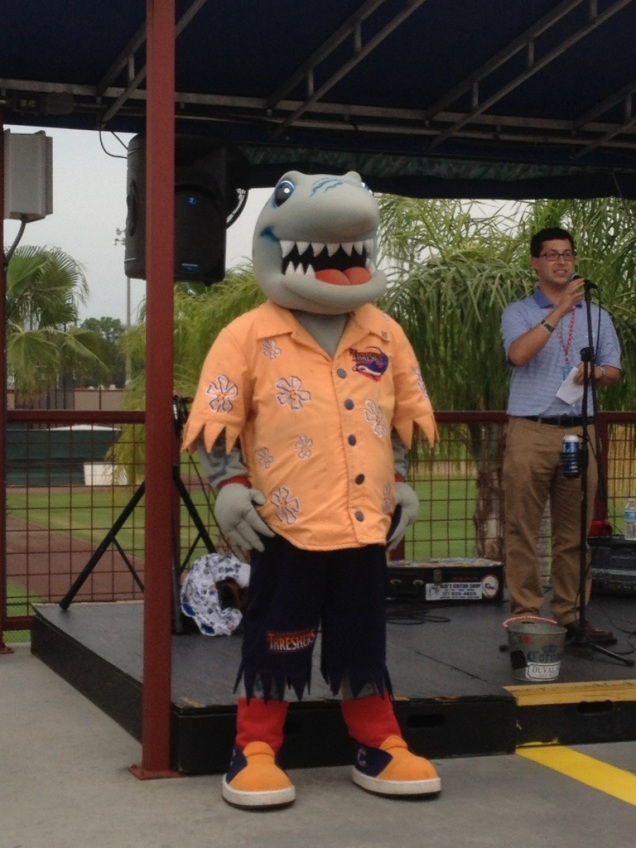 Tonight, Baseball Ross and I had the pleasure of being introduced to the 2013 Clearwater Threshers at the party held for season ticket holders.

It was a great time and I feel fortunate to get reacquainted with a few returning players as well as meet a few new ones. I recorded a video of their introductions so that you could enjoy it.

I like these guys. They’re obviously talented but they also seem to have quite a bit of personality.