For the ten prospects on the list, they are players I have watched and am excited to see progress. 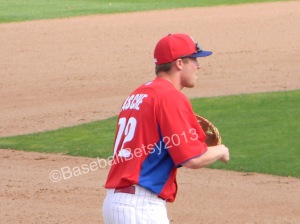 1.  Cody Asche. Recently called up to the majors, he has always been a guy that we’ve had our eyes on. He’s a solid third baseman and has the numbers to back that claim. We watched him most of last season with the Threshers before he was moved up to Reading. 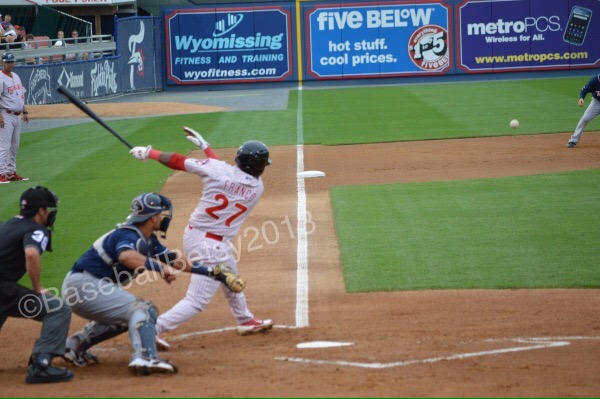 2. Maikel Franco. He started the season here in Clearwater before moving to Reading. He plays third and what we like about him is that he has soft hands. He will field the ball, taking time to catch it, then will fire it with laser-like precision. He can also hit the long ball. 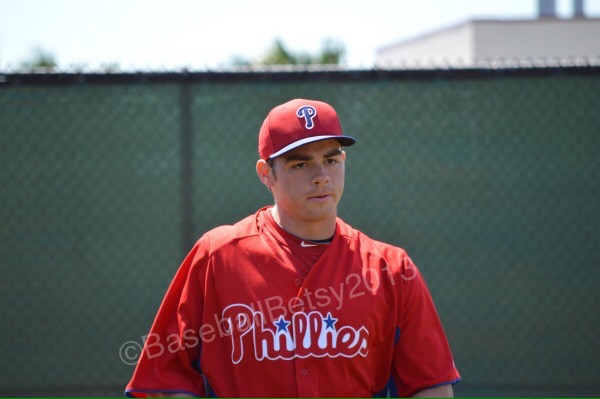 3. Jesse Biddle. This much-touted southpaw certainly has what it takes. During a game in April that we watched on MiLB.tv, he racked up sixteen strike outs in seven innings against Harrisburg. He also lead the Eastern League in strike outs at the all-star break.

4. Severino Gonzalez. He’s moved around a lot this season, Extended Spring Training, Lakewood and Clearwater. Gonzalez has been both a reliever and a starter this season and been successful no matter when he’s pitched. 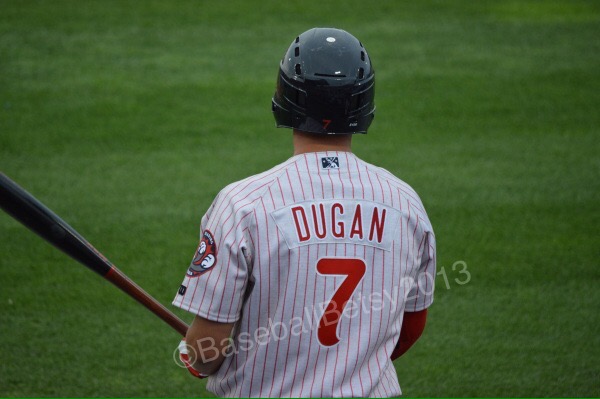 5. Kelly Dugan. He started the season on the disabled list but has come back to amaze. He has a bat that most people notice, but what impressed me was his arm. I saw him catch a ball deep in right field and fire it to third with pinpoint accuracy. No bounce.

6. JP Crawford. A first round draft pick this year, he’s already shown why. He started in the Gulf Coast League and has already leap-frogged over Williamsport to Lakewood. This 18 year old short stop was hitting as high as .380 before being sent to Lakewood last week. 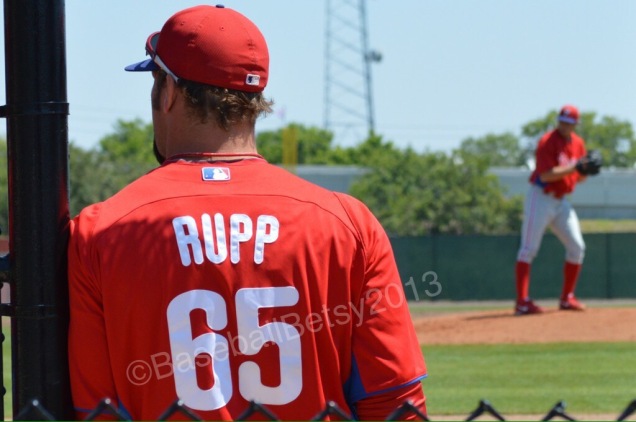 7. Cameron Rupp. Rupp played in Clearwater last season, started this year in Reading and has already moved up to Lehigh Valley. He’s a solid back stop. He hits and is a great defensive player. While he may not be the replacement for Ruiz next year, could he be a solid back up for the Big Team? 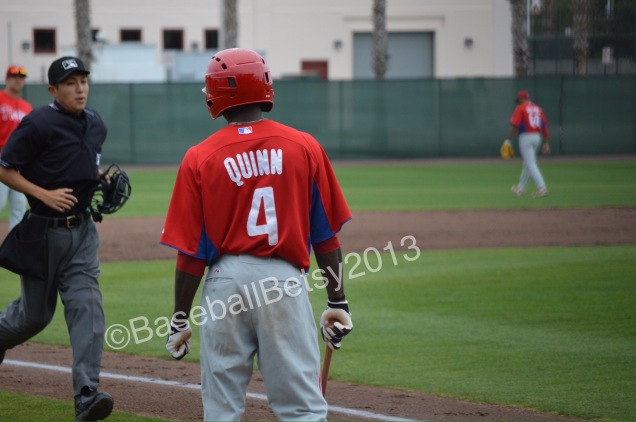 8. Roman Quinn. This shortstop had an on-base percentage of .669 and 32 stolen bases before being sidelined by a broken left wrist. He’s one of the fastest players we’ve even seen. While he’s been a little error-prone, his speed more than makes up for it.

9. Cameron Perkins. He is a solid outfielder with a very strong arm and bat. He was hit by a pitch during a game and suffered a broken wrist. He’s returned to the team though he is just getting his timing back and looks to finish the season strong.

10. Kenny Giles. This reliever is one to watch. Last season, we saw him hit 101 on the speed gun in Dunedin. While not quite as fast after his injury this year, he still has a fast ball that just can’t be hit.

Hobby Milner-This Threshers pitcher is one to watch. He’s one pitcher we will go out of our way to see. After his first three starts of the season, he’s become one of the most consistent pitchers. With 11 wins and is tied for the most wins in the Florida State League.

Finally, our ‘Unsung Hero’ award would go to Carlos Alonso. Alonso is spending his second year in Clearwater. He’s one guy that we truly admire, we can’t think of another player who plays as hard, every single play. He’s a solid second baseman who has only had two errors all season. He also has a knack for getting on base, drawing walks and scoring runs.

It’s a beautiful day here in Clearwater. Sun is shining, the grass is green, the orange and palm trees away, I’ve never seen such a day…Wait that’s a song!

Roy Halladay is making his first rehab appearance with the GCL Phillies. They are playing the GCL Pirates with whom they are battling for first place in their division. It’s a key game and who better to have start than your ace?

Halladay pitched 6 innings: 6 hit, 3 runs, 3 walks, and 4 strike outs giving up one home run. The GCL Phillies were down 3-2 when Halladay left the game.

Will Morris pitched two great innings, shutting down the pirates. In the bottom of the 8th H Deivi Grullon smashed a long homer to right to score 2, giving the Phils a 4-3 lead.

Ricky Bielski came in in the ninth for a 1-2-3 shutdown inning, including a strike out to seal the win.

This game was important because the GCL Phillies and Pirates are neck and neck fighting for the lead in the Northwest division and the playoff spot that comes with it.

Today’s game is key is heading to the playoffs…it put the Phillies 1/2 game ahead of the Pirates.

Tomorrow, the GCL Phillies travel to Lakeland to take on the Tigers.

It’s been a tough year to be a Phillies fan. I love the Phils, but between the injuries and other mishaps and conundrums, it’s been rough.

There’s been suspensions (Ruiz, Mojica, Abreu), injuries (it would almost be shorter to list who wasn’t injured at this point) and all the other difficulties that a team would usually face…this year was unbelievably tough. Add to that the problems we have with the salary cap and players with huge contracts that are not attractive to trade and you have a recipe for disaster.

This team has battled back from a 2 and 10 start to take the lead in their division in the Gulf Coast League. Granted, with today’s win, it was a half game, but it IS A LEAD!

With players like JP Crawford, Wilmer Oberto, Cord Sandberg, Jan Hernandez, Herlis Rodriguez, Feliberto Sanchez, Ranfi Casimiro and Ricky Bielski we have a team that has heart and never seems to give up. It took them a while to get started and the turn around has been dramatic. I’ve seen them come from six down in the 7th and come back to win.

They’re like the Goonies, they never say die and THAT is what makes them so much fun to watch. It’s not easy with the majority of their games held at NOON in the Florida heat and humidity and many, if not all, of the practice fields where they play lack shade. Most have little creature comforts like water fountains, soda machines and at a few, it’s hard to find a restroom. Yet, despite all that, there are a group of die hard fans of rookie ball that manage to tough it out and it IS worth it. I’ve enjoyed these games more than any others I’ve seen this summer.

Being at so many games, Baseball Ross and I have been lucky enough to meet a good many of the players and they seem to be some great kids. A friend of ours is a locker room attendant at the Carpenter Complex and has worked there for fourteen years and he has said that this is the nicest bunch of kids he’s worked with.

The next two days could very well decide the season, with a home and home series against the GCL Pirates who are 2nd in the division. Ross and I plan to travel down to Bradenton tomorrow to root on our friend Ranfi Casimiro.

On Thursday, the Pirates cross the Sunshine Skyway Bridge to the Carpenter Complex where a rehabbing Roy Haliday will start.

These two games are key in how the rest of the season will go and IF the GCL Phils can take these two games, they will be poised to head into the playoffs.