It was announced this morning that former Clearwater Thresher Josh Tobias has been traded to the dreaded Boston Red Sox for RHP Clay Buchholtz. 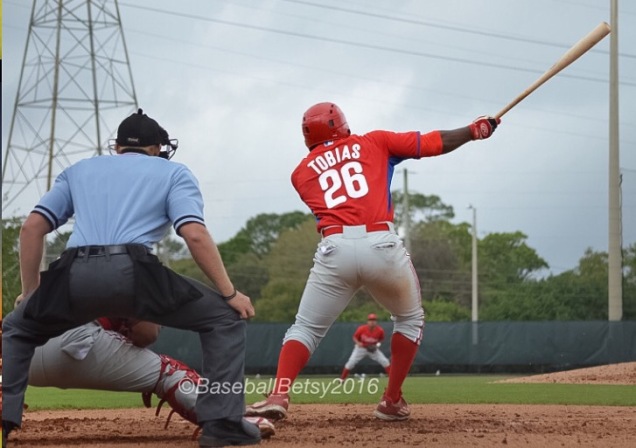 Tobias started with Lakewood and ended with Clearwater. He is young but showing strong potential. Buchholtz is on the downside of a good career. He has one  year (and 13-million dollars) remaining in his current contract. He may be ok as a temporary stop gap measure while waiting for some of the minor league pitchers continue to develop and mature. That being said, Buchholtz has had issues in the past, ending up in the bullpen on more than one occasion.

Tobias, while young, has shown signs of great potential, with a strong bat. Tobias has a .301 batting average while in the Phillies’ system. You can see his bat strength in this video from the final game of the Threshers season where he hit a strong homer to right. See HERE.

Will the gamble of giving up potential talent for a stop gap pitcher pan out? Only time will tell.

The Philies have traded pitcher Chris Leroux to the Toronto Blue Jays for “cash considerations”. Leroux is expected to join Triple-A Buffalo. Leroux had been listed on the Phillies extended spring training roster.

Alfaro played three innings–hit two strong line drives that might have gone out, if the wind didn’t blow it back in.

John Richy, the newly acquired RHP from the Dodgers, made his debut with the Clearwater Threshers tonight.

Here are some pictures:

Richy went 7 innings, 4 hits, no runs, 1 walk, 3 strike outs and a pick-off. A rather impressive debut for our new pitcher.

My only regret is that I won’t get to see more of him before the end of the season. Well, there’s only approximately 165 days until spring training….

Sometimes, the surreal happens. Sometimes, when it happens, you have to keep it quiet to respect someone’s privacy until the event is over.

This is one of those times.

Earlier this week, I received an email from a scout from the Texas Rangers. He had viewed my Youtube Channel and liked what he saw. He wanted to know if I had additional video on three other minor league players as well.

I was lucky enough to get to meet him this week and was blown away when he introduced me to another scout (this one from the Braves) with the introduction, “If you ever need video on these guys, you have to look at her Youtube channel.” I was so flattered. Baseball Ross and I have worked really hard to build up our library of video of the young guys and to know it was appreciated on a “professional” level was rather cool.

So when I heard that the Rangers were going to get Hamels, I was floored. For once, I was on the “inside” looking out, not the other way around…and the view was amazing.

THIS JUST IN: Disagreeing with Ruben Amarro Jr. Will end up with you being banished to Canada! YOU’VE BEEN WARNED!

All silliness aside, Michael Schwimmer has been traded to the Toronto Blue Jays for Art Charles, a 1B minor leaguer.

Schwimmer has been the center of controversy since last fall when he was sent down to Lehigh Valley. Schwimmer argued that he was injured and therefore could not be sent down and should have been placed on the disabled list.

His fans, known as the SCHWIM Team, will miss him. I’ll still see him here in Dunedin.

Good luck to him.

Even my Shih Tzu, Veronica has gotten bored reading MLBTrade rumors and waiting for Ruben Amarro Jr to make a big trade…..

It was only yesterday and even earlier today when it seemed every major news source was reporting that the Phillies were burning up the phone lines looking to gauge interest in Cole Hamels. Heck, even CBS Sports reported that “Cole will not sign with the phillies”.

Today, Rabid Ruben claims that they plan to keep Hamels “in our uniform in the short term and long term” as reported in the Inquirer by Matt Gelb.

It makes me wonder what caused such a shift in 24 hours? Fan outrage? Since trading Hamels at this point would amount to a “rental” did they not find a good enough deal? Did people call can cancel season ticket orders for next year?

CBS Sports is reporting that Cole Hamels has said that he will NOT resign with the Phillis and John Heyman of CBS also says that the Phillies have been making calls to shop him around.

The rats are fleeing the sinking ship!

Why can’t Rabid Ruben just do what Captain EJ Smith of the Titanic do and go into his cabin and wait for the flood?

It’s a day of moment in the pharm system. Some going up, one coming down. Jordan Whatcott, Frank Gailey and Ryan Duke were all promoted from Reading to Lehigh Valley. Pat Misch was sent from Lehigh to Reading.

So what does it mean?

Personally, between trading Thome (especially without consulting Manuel, who was quoted as saying that he didn’t know that they had traded Thome until after the game) the rumors rabidly circulating that they are looking to deal Cole Hamels to the Rangers OR that the Reds, Dodgers and Yankees are all interested in Shane Victorino and now, all these moves….

I think they are floundering, they are desperate and hopelessly flailing, trying to find something, anything to staunch the bleeding.

As much as I’ve questioned Amarro’s actions over the last year or two, this is the most concerning to me. He obviously knows that his job is on the line. He bet everything that the veterans on this year’s team would be able to pull him through. He spent every dime he could on older players, making a team for now, but the problem is that he over paid and gave older players long term contracts that keep them tied to the franchise. The contracts are also so large that very few teams could afford to inherit these contracts IF we could convince them to take them in a trade.

I’ve come to think of Ruben as “Rabid Ruben”, foaming at the mouth and running around and biting at anyone and anything trying to find something to work. In the meantime, the team is floundering, foundering and nothing will get better until Rabid Ruben is “cured”. By cured, I mean excised like a cancerous tumor.

At this point, it’s OBVIOUS that he’s grasping at straws, throwing in not only the towel but every other piece of laundry in the basket too. Let’s stop the cancer from growing, excise it now, get someone else in there and stop the damage before it gets any worse. Why not do a wholesale housecleaning at the top and also replace Manuel with Hall of Famer, Iron Pigs’ Manager Ryne Sandberg?

They need to keep Hamels. We do not have enough pitching talent for next year without him. I think we have pitchers coming up that might be ready in the future, but not this year and not next year.

As far as Victorino, I like the guy, BUT as I’ve written before, we are flush with young talent that could grow into the position, Derrick Mitchell, Tyson Gillies, Jiwan James, Steve Susdorf, Domonic Brown (if he ever gets healthy) and those are just the guys I can think of off the top of my head. We have to look to these young, talented guys for the future; Rabid Ruben’s habit of looking outside the pharm for senior talent obviously isn’t working, let’s use the talent we’ve home grown and let them lead us into the future and stop looking back.