Ahh, fall is in the air! The air is cool, low to mid 80’s, mostly sunny, nice breezes such a changed from the mid-90’s and stifling air of the Gulf Coast League.

The Fall Instructional League got off to a late start as the first several days of play had to be postponed/cancelled due to severe rain.

Yesterday was the first game that we were able to attend. It’s been interesting to watch because several of the players who will be playing in the Arizona Fall League have made a stop here in Clearwater to get tuned up before heading West. They played my hometown Dunedin Blue Jays. During the game, I got to see Kelly Dugan bat. The game itself was rough to watch with the Phillies losing 8-6.

The Orioles, today’s opponent, had not played in SIX days. In this short league, approximately a month (depending on team) a loss of six days is detrimental to a team. Today’s game was a scheduled twelve innings to help the Orioles get in much needed work.

What I liked about today’s game was the fair number of Arizona Fall League players who played today. Those players are leaving today for Arizona so many of them got in one last practice before leaving on a jet plane.

Kenny Giles started. While I understand why some people may have some concerns about him, I still get a kick out of watching him pitch. When I’ve seen him play in Dunedin (one of the few stadiums with a radar gun) He’s thrown over 100mph. While today’s game at Bright House lacked a gun, I loved to hear the ball snap against the catcher’s glove. There’s a certain pop when a ball really has velocity and you can hear that with Giles’ pitching.

I also got to see Luis Encarnacion’s first game as a Philllie. If you want to see video of his first hit or an amazing bare-handed grab you can go to Baseball Ross’ Blog HERE.

Kelly Dugan played, Austin Wright and Kyle Simon pitched, so who needs to go to Arizona to see some of the best Arizona will have to offer?

The game itself was however disappointing in score, with a final of 9-1 in favor of the Orioles. The twelve innings went just over four and a half hours, not bad for free baseball. The weather was perfect. So I guess a “bad day” of baseball is better than the best day of almost anything else, I’m not complaining.

Tomorrow is an off day as they do not play on Sundays. I’ll be back on the beat Monday.

The most recent work group list is in. This is after this weekends cuts. 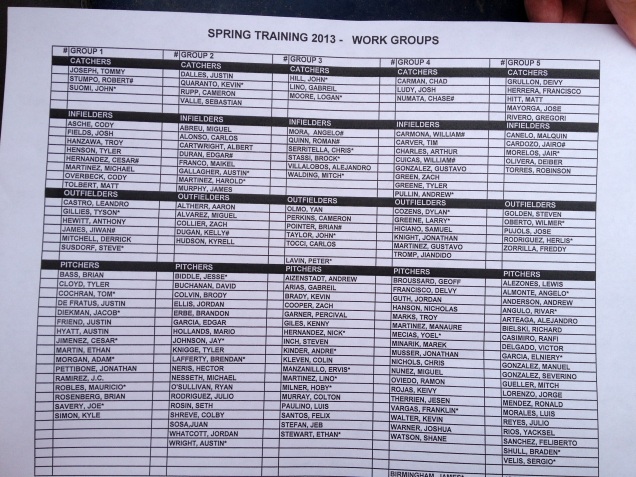