Fall Instructional League games are much like spring training games, they are more relaxed, coaches can end or “roll” an inning and pitchers often pitch only an inning.

Someone forgot to tell Phillies’ First Round draft pick Alec Bohm…he sent a ball almost out of Spectrum Field! He hit a blazing line drive that hit off near to top of the “F” on the sign above Frenchy’s Tiki Bar! It was a thunderous hit that even the sound was no-doubt-about it. I managed to catch this swing, landing and Bohm’s bat flip and run around the bases… 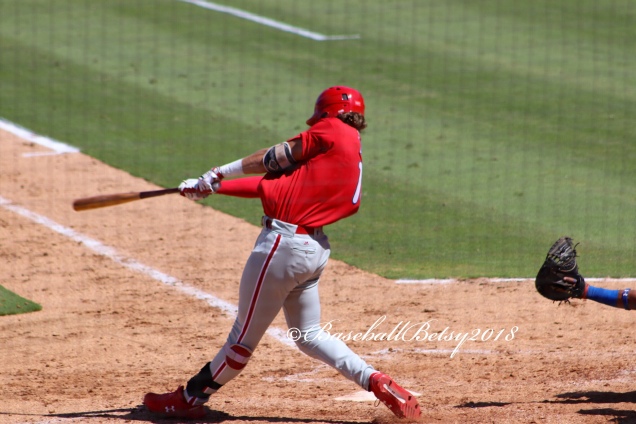 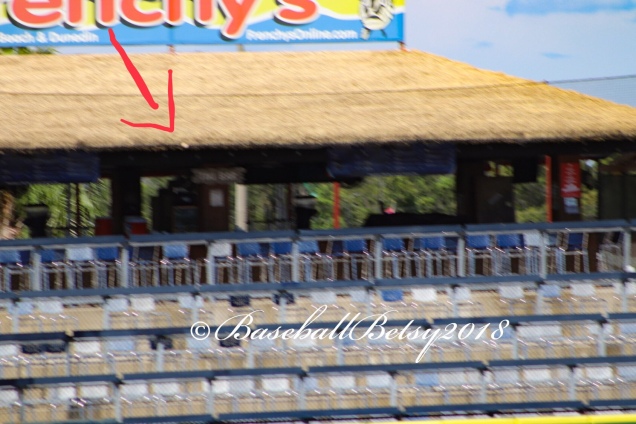 Today was one of those days where nothing went as planned but turned out great in the end. I had hoped to see former Blue Jay Pat Venditte make his first appearance at Phillies camp since being traded to the Phils from the Mariners. Since he had just returned from the World Baseball Classic, we thought that he would be at the Phillies’ complex. He was not.

So I jumped in my Mini and headed back to Dunedin and to the Mattick Training Complex where the AA and AAA Phillies and Jays teams were playing. I got to the field as the Jays were taking the field in the bottom of the third inning. Just as I got behind home, the crowd rushed to the fence and when I looked up, I could see why, Josh Donaldson was about to bat.

I have to pause here to say that this was one of the coldest days of the winter. Early this morning, it was 39* F (4*C) and by now, it was in the mid 50s (12.8* C) with a very strong wind coming in from the gulf, right into our faces. It was freezing.

Even into that strong headwind, there was no doubt that that ball was going to go out. There was a collective, “Ooooh” from the crowd as the ball cleared the fence and bounced out into the grass near the softball fields on the other side. It was one beautiful shot INTO the wind.

It was his last at bat of the day so I don’t know how his earlier at bats went, but let me tell you, he’s hit long homers into the wind the last two days, there is no doubt that his timing is down and he should be good to go, once he is given the green light to run again.

I never did get to see Venditte, rumor is that he was with the Phillies MLB team. Frankly, I forgot about him once I saw Donaldson hit that homer.

It really wasn’t publicized and by the size of the crowd, or lack thereof, that was obvious. I found out from a friend on Facebook of all places…The price for the last tune up before Lakewood leaves for Greenville South Carolina was right too…FREE.

There was roughly a hundred people at Brighthouse and we were lucky, the weather was wonderful; so cool, no humidity. These were the die-hards, season ticket holders, family and pitchers charting for the night. It’s the kind of night I love to watch baseball. You can really get lost in the game. The people there are really into the game, there’s no crying baby in front of you, no kid kicking the back of your seat, just people who love the game.

We met some dear friends and settled in.

My only complaint and one I’ve now complained not once, but twice to the Threshers is that there STILL isn’t a roster printed. So on top of the Threshers not having names on their jerseys, there was no list to coordinate the numbers with the names. So after a couple of innings, we gave up guessing who each player might be. The BlueClaws players were still wearing their Phillies spring training jerseys which had their names on them so that worked. By late today, I was told by the Threshers that there should be an official roster announced by tomorrow. Yeah, within 24 hours of the first pitch of the season and we still won’t know who’s on the team! Sheesh!

Now the first pitcher for the Threshers, him I knew, Mike Stutes was pitching to rehab his sore shoulder.

Stutes pitched a strong inning…a four out inning. Yep, they kept him on for an additional batter so that he got enough pitches in. He looked good.

My friends who are season ticket holders went to chat with some of their other friends and soon called me over. The father of Bryan Morgado was sitting with them. Bryan, who will be starting the year with Lakewood, was scheduled to pitch. Morgado looked sharp. He had command. He pitched between 92-94 mph and looked like the top left handed reliever of the future.

Cameron Rupp for the Threshers and Kyrell Hudson for the BlueClaws each had long homers. Aaron Altherr had two hits for Lakewood.

It was a fun night and while the final score really doesn’t matter, in fact, they played an extra inning to get a pitcher his work, the final was 7-1.

So that’s tonight’s wrap up. I’ve got a lot going on this week and hope to keep you updated….

After the lackadaisical day the Phils had yesterday, I took my time getting to my seat. I stayed in the shade behind home plate and only wandered to my sun-drenched seat in Section 118 a few minutes before the national anthem.

The first half of the first was average, Cliff Lee was slipping into his mid-season form. The Pirates pitcher was sooooo slow. so very slow. He gave up a run….then another….then Lee   sat the Pirates down…then Mr. Slow…Thome managed to come home…

This pitcher was so slow that people were heckling him, “Come on! Hurry it up! We’re baking to death out here!” and “It’s 85! Get a move on!”. Indeed he was slow, it took over forty minutes for only TWO innings. He gave up two more before they sat him down after pitching 3 innings.

Cliff Lee held them scoreless through six and in the 7th, Kyle Kendrick came in. Things were about to heat up…literally, the scoreboard read a sweltering 87 degrees.

It also started getting ugly. Kendrick was getting ready to pitch when Yamico Navarro put him arm back and started waving at the umpire. I assume he was trying to call for a time out…but the ump didn’t call it. The pitch was a strike. On the next pitch Kendrick pegged him on the arm and a pinch runner came in for Navarro.

It got uglier as during the bottom of the 7th, the Pirate pitcher beaned Miguel Abreu in retaliation for Kendrick’s hit on Navarro. Abreu was unhurt.

Antonio Bastardo came in at the top of the 8th with a 4-0 lead. Bastardo gave up 3 runs. After that, Cholly gave him the hook and brought in Michael Stutes. Stutes gave up another run so the game was tied.

Nothing happened until the bottom of the 9th. The game was tied and there was no one warming up for the Phils in the bullpen. This was it. There were two outs when Scott Posednik came up to the dish. They say revenge is a dish best served cold…and the Pirate pitcher threw AT Pods…The ball went behind him. Pods retaliated by taking the next pitch….

AND SENDING IT OVER THE RIGHT FIELD FENCE! Game winning home run! Take that you scalawags!

Posednik was the hero of the day and may be this will knock the Phils out of their phunk, err, funk. At least we know that Kendrick and Posednik still have some spunk.