The clouds started rolling in this morning but we were able to get a full day of spring training in before the rain came.

It was an eventful day. We saw the pitchers warming up then went to the stadium to watch batting practice. Then we returned to the Carpenter Complex in time to catch the catchers take BP then do pop-up drills.

Baseball Ross and I put together a rather extensive video of today’s activities, you can watch it HERE.

The best picture of the day is when Logan Moore ran into the fence right in front of me during pop-up practice. You can see it in the video above and of course, I keep shooting when he did. This is what I got:

Below you will find some more stills from the day:

Sometimes, the surreal happens. Sometimes, when it happens, you have to keep it quiet to respect someone’s privacy until the event is over.

This is one of those times.

Earlier this week, I received an email from a scout from the Texas Rangers. He had viewed my Youtube Channel and liked what he saw. He wanted to know if I had additional video on three other minor league players as well.

I was lucky enough to get to meet him this week and was blown away when he introduced me to another scout (this one from the Braves) with the introduction, “If you ever need video on these guys, you have to look at her Youtube channel.” I was so flattered. Baseball Ross and I have worked really hard to build up our library of video of the young guys and to know it was appreciated on a “professional” level was rather cool.

So when I heard that the Rangers were going to get Hamels, I was floored. For once, I was on the “inside” looking out, not the other way around…and the view was amazing.

You can check it out HERE

This week I was featured in the Philly Daily News as the Superfan of the week! I’m posting a copy of the article so that those of you who are out of the circulation area can see it since it only appeared in the print edition. 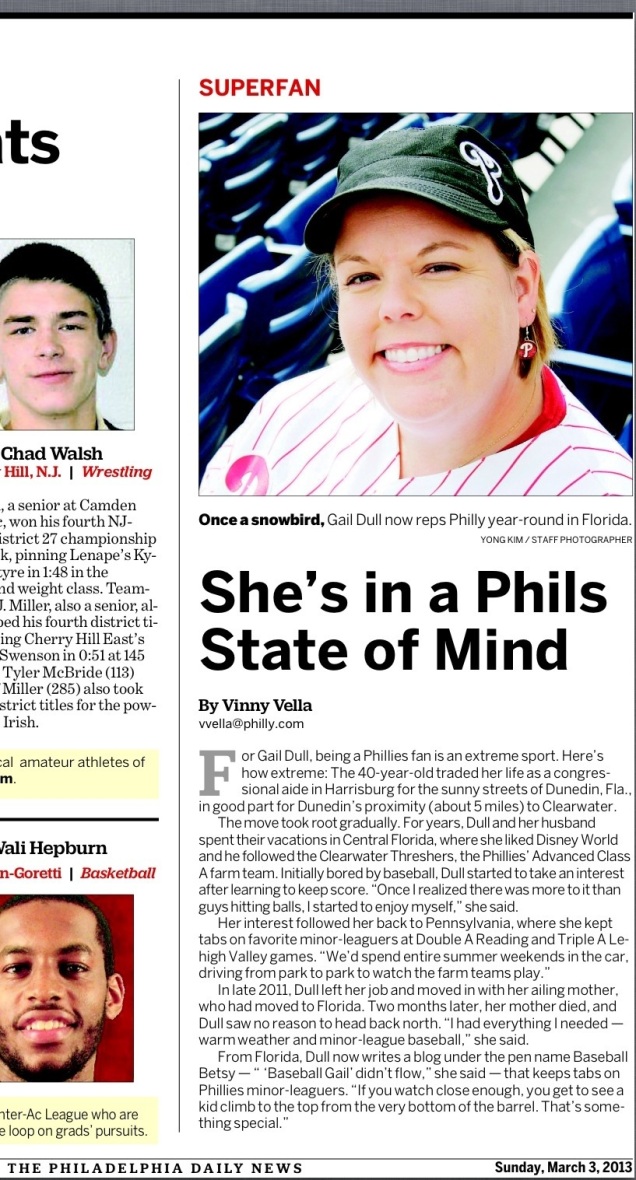